How to survive a fractious festive period 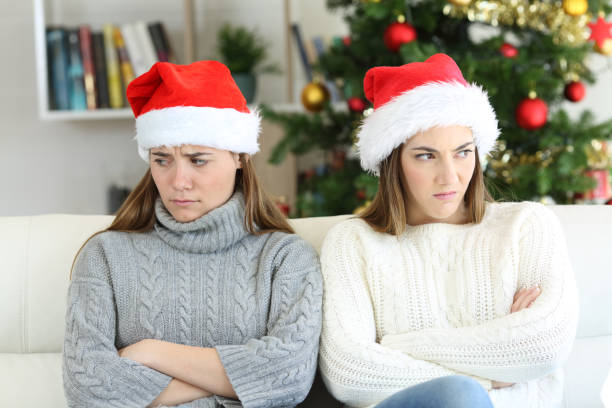 The season of goodwill is nearly here again.

Unlike last year in the UK, it’s not expected that there will be restrictions on families coming together over the festive period.

Well yes, but perhaps not for every family.

In this age of culture wars and ever-increasing polarisation, there are more divisive issues to navigate than ever before.

When it used to be hard enough reaching agreement on what film to watch for Xmas afternoon, how do we survive an imminent series of social gatherings with relatives who might sit stridently on the other side of the Brexit, vaccination, mask-wearing and climate debates?

The first, from Francesca Gino is about working to become more receptive to what others are saying and where their ideas are coming from. This can be reflected in our language, posture and expression towards others. It involves acknowledging, and if necessary, clarifying what’s being said; being more hesitant and less dogmatic in our responses; focusing on the positive benefits of our position, rather than tearing down the other person’s argument; and finally looking for points of fundamental agreement to build from. What we know is that we become more receptive in response to others’ receptiveness, so this approach has the potential to transform tense conversations.

That doesn’t sound too difficult, does it? Worth a try surely?

It’s too easy to fall into destructively polarising positions, especially when we’re heavily invested in a given perspective. The second idea, from Anne-Laure Le Cunff is to practice nuanced thinking. We’re often too quick to jump to conclusions, so a useful habit is to build a little time to reflect on whether our response is simply a reflex, based on our long-established beliefs or experiences. We need to be careful of “all or nothing” positions that just don’t stack up. How often is the statement, “If you’re not with me on this then you must be against me” really valid? And in reaching conclusions for your argument or against the other person, do you really have sufficient evidence for your position?

Honestly, who’s been guilty of stoking the polarisation? Well, take a step back and stop it!

Finally, in exploring why facts don’t change minds, James Clear explains that it’s useful to remind ourselves that we’re social animals who need to belong – and that we tend to seek belonging among those with similar beliefs. This means that relying solely on facts in an argument will often have limited success, versus the appeal of the group/tribe the other person identifies and seeks belonging with. Changing perspective requires changing thoughts on belonging and risking social abandonment. Therefore, to change deeply entrenched views, we need to offer access to a new tribe, with new opportunities and advantages. Essentially, we stand a better chance of changing someone’s mind if we seek to become friends with them.

In short, if we want to change someone’s mind, we shouldn’t aim to win the argument – instead, we need to flex our curiosity, deepen the conversation and work hard at developing a genuine connection.

There you go. Don’t argue, make friends. You’re family after all!

So, we don’t need to fear the holiday arguments.

We don’t need to accept a terminally polarised world.

There are practical actions we can take responsibility for. They are learnable and with practice, we can improve our mastery and strike a blow against the very idea of culture wars.

Anyone care to disagree?